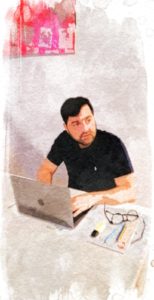 Born on the 29th July 1975 in Taranto, Pietro Carucci was brought up his father and mother, his father a worker at Ilvaand his mother a housewife. After graduating in Geometry, Pietro moved in 1997 to the city which would later become his adopted home. He experienced his first university years alongside friends from his degree, who would go on to characterise his experience and accompany him throughoutsome of the most important moments of his life, the off campus University experience.

Those who have experienced this ‘off-campus’ experience at least once in their life will know exactly what it means to desperately search for accommodation, indeed even for a roof above your head, somewhere you can cook yourself that quick and easy bowl of spaghetti with tuna, try to live alongside housemates who more or less share the same interests….but are often far from ideal. That experience of living a brand new and unknown city in a fantastic but mysterious way. Not going to sleep until sunrise and then waking up just hours later to head to university to sit behind your desk at 9:16am.

Pietro immediately began work as a supervisor in the renowned study room ‘la bottega degli orefici’ to pay for his studies, and after trying his hand at various jobs, he began to gain useful experience in the commercial sector, first in the “coin” group as a manager in the mens department, where he meet a director with an ‘ex standa’  who would go on to train him for several years and from who Pietro would learn that “behind every number there is a meaning… there is a person”.

Soon after, he began his career in a sector that he would stay in for the next 20 years, at one of the most importantfoundations in the real estate sector in Bologna and indeed in Italy. Working here saw Pietro take on more and more new responsibilities and challenges each year in ‘Rent to Rent’, starting from clerk in charge of submitting lease contracts to the tax office in charge, to manager of the most important and historic intersection of Demand & Offer of housing services in the city.

Whilst still within this company, Pietro became CommercialDirector or Property Management in 2012 for the Bologna region. Placed in this top management position thanks to his strong commercial skills, reliability, team spirit and trust, he reshuffled and reorganised his area which was suffering in numbers in the midst of a real estate sector crisis. He developed a new strategy, creating a winning team and a service that experienced huge improvements for its area of apartments year on year, tripling the turnover. After satisfyingthe company, the landlords who entrust their precious property, as well as the students looking for a home to live, Pietro was eventually put in charge of managing 250 buildings and 1000 university students, as well as to stay on top of the commercial direction of Florence. A strategy of management, commercial awareness and of communication through internal brands of the properties… a true win-win-win style.

Today, after gaining almost 20 years experience working in Bologna’s real estate industry, during perhaps the most difficult period in the history of this world as we know it, as well as directing the historic Dehonian student residence ‘Villaggio del Fanciullo Youth Centre’, thanks to an important network of professionals in the sector, Pietro has decided to embark on a new challenge of his own, founding ABITABO in order to continue to manage properties for greater satisfaction of Bolognas landlords who deserve more attention than the large corporations can offer. Sometimes, distracted business organisation (?????) and try to offer the best housing solution to off-campus students who he will continue to meet through the new journey of his career.

“Every single student, parents, worker, Erasmus, Colleague, supplier and landlord who I have had the pleasure of crossing paths with throughout my personal and proffesional journey, as well as every property that I have visited, checked and breathed in (experienced better), is now a part of me”